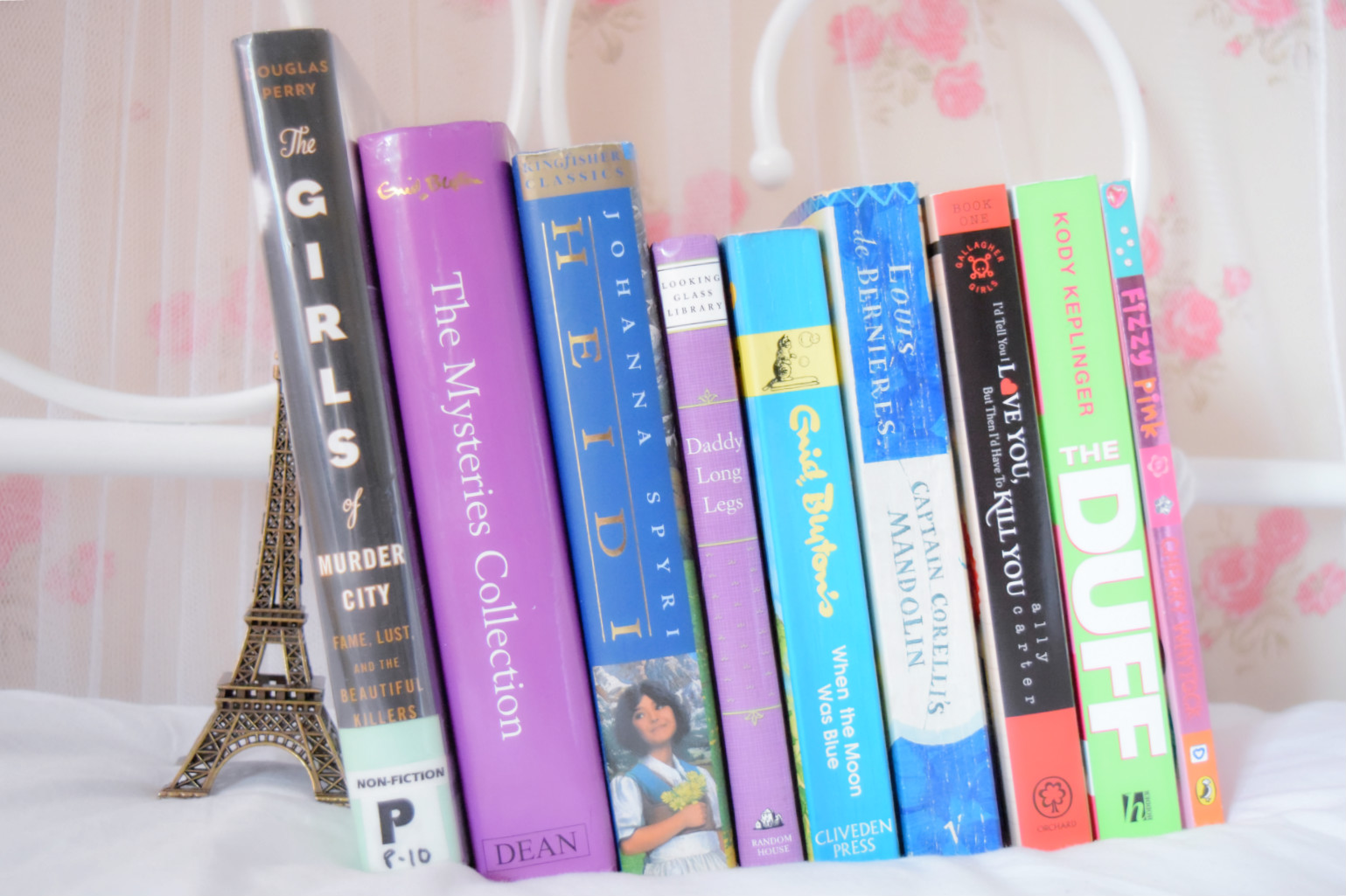 I’d Tell You I Love You, But Then I’d Have To Kill You – Ally Carter. The Duff – Kody Keplinger. Fizzy Pink –  Cherry Whytock.


Sept. 14: The 5 books that have impacted your life the most.

Okay so, I started to look through my books and I tried to pick books that had ‘impacted my life’ but I ended up just picking up ones that I really liked. Sorry. I merged this prompt and the one for the 26th. Brain fog will do that to people. I am aware it’s more than five books but i’m not sorry about that.

The Girls of Murder City is a book about the women that inspired the musical Chicago. It is one of my favourite musicals and straight after watching it for the first time I bought the soundtrack and this book on Amazon. There is something really interesting about the fact that even though those women committed the murders they didn’t get found guilty because they were pretty. I haven’t finished reading this yet but it’s really interesting. (I didn’t steal my version from a library, I swear, I bought it second hand.)

The Mysteries Collection was one of the very first books I really loved. It has three stories about kids that solve mysteries but each of the kids were really interesting in their own right. I haven’t read this book for a good few years but whenever I was feeling unwell as a kid and couldn’t sleep i’d read this book and imagine that I was a part of The Five Find Outers.

Heidi was another one of those books that I just liked to read for fun. It really is such a lovely story and I love the idea of living on a mountain. The first time I read it it was a pretty big deal because it was considered a ‘real’ book(?). It’s child’s fiction but to me it felt like a proper adults book haha.

Daddy Long Legs is my all time favourite book. I actually mentioned it last year as a book that you must read. After the first chapter the whole book is in letters written from, the main character, Judy’s point of view. I love letters and I love this story. It’s a really subtle love story too- which is just a bonus. I love the little illustrations. I have never fallen in love so much with a book. It is 100% my favourite and I don’t see me loving another book any more than this one.

and yes, I am a little sad that there hasn’t been a movie/tv show adaptation.

and no, I don’t count 키다리 아저씨 as a movie adaptation because it’s all over the place and if you didn’t know it was based off the book/ a modern version of it then you wouldn’t guessed that it was. It is a cute film though.


When the Moon Was Blue is yet another Enid Blyton book that I love. I was such a huge fan of her books when I was younger and this one I got at a school book sale, aka the place where my love for secondhand books came from. It contains 37 short stories all of which are lovely.

Captain Corelli’s Mandolin was suggested to me by my English teacher when I was at the hospital school. He warned me that it was a hard to get into book (but a very good story) and I read the blurb and decided it sounded interesting. It takes about 400 pages for the story to really get going but it really is worth it! This book took me quite a few months to get through but I did it eventually and the story just leaves you going ‘awwww’ at the end. If you are up for a challenge and like books that are based around the time of WW2 then I definitely suggest you read it.
This one I also mentioned last year as a book you must read.

I only bought I’d Tell You I Love You, But Then I’d Have To Kill You because of the title. I had no idea it was part of a series or how much I would actually like the series. The book is so cringy at the beginning, it reads like a typical book aimed at teen girls but I definitely got into the story. I own the complete series now (thanks mum!). I mean, a school for girl spies? It’s a fun read and made me realise that just because i’m getting older it doesn’t mean I have to only read old people books.

The DUFF is another one of those books that when it starts I am transported back to 2009 tumblr. It is very different to other YA books that I have read, a parents guide rated it a 15+ book bc sex and drinking and talks of contraception etc
The reason i’m including this book is because while I don’t usually care about books and their movie adaptations this one annoyed me more than it should have. The book tackles issues I haven’t ever seen in a YA book before while the movie turns the story into a It’s a Boy Girl Thing/She’s All That and Mean Girls crossover.
and where did Maddison come from? I don’t get it. Who is she. I get that they had to not exclude their main audience and get it down to a PG 13 but I don’t get why they did it how they did.
So while the book isn’t an amazing life changing piece of literature it’s on the list because I have never been so annoyed by a book and it’s movie adaptation.

The very last book is Fizzy Pink. This was my favourite book as a very young kid. It’s a story about a girl who moves away from her best friend and writes her letters. It’s not an only letters book like Daddy Long Legs but it does have them in it. I remember thinking Fizzy was so cool and wanting to be just like her. It was practically my bible back then.
(except ykno…my bible was my bible..)

and those are some books that I really like/liked! Have you read any of them?
and which books would you suggest that I read?

Have a lovely day!