ahhhhhhhhh! Im so happy!!!
1, its October and I love October because
2, at the end of the month is HALLOWEEN!!!

Anyway, on the 27th September after literally months and months of umming and erming about it… I messaged Jessie of Decodoodah on Etsy about getting a custom deco phone case made.
I had previously talked to her on instagram about possibly getting one for my S4 (months ago) but I use my S4 way toooo much so have such a pretty case on it.. I literally drop it every other day… I couldnt subject such a pretty phone case to being dropped so much….

Now, im not the best at messaging or talking to people. Actually, im probably the worst. Whenever it comes to getting something custom made I usually go “uh idk whatever you think” and then they show me a draft and I go “yeah looks good” BUT Jessie was so nice and I felt so bad because I wasnt sure what I wanted or how to get the words to say what I wanted and I felt like I was being really difficult but she kept replying and telling me not to worry as we would get the design perfect in the end and we did!

Not only am I the worst for talking to people or putting my opinon across.. Im also the worst for.. uh.. replying quickly.. So honestly five stars for customer service and niceness!
Thats why im writing the review x.x
no seriously.
thats why. 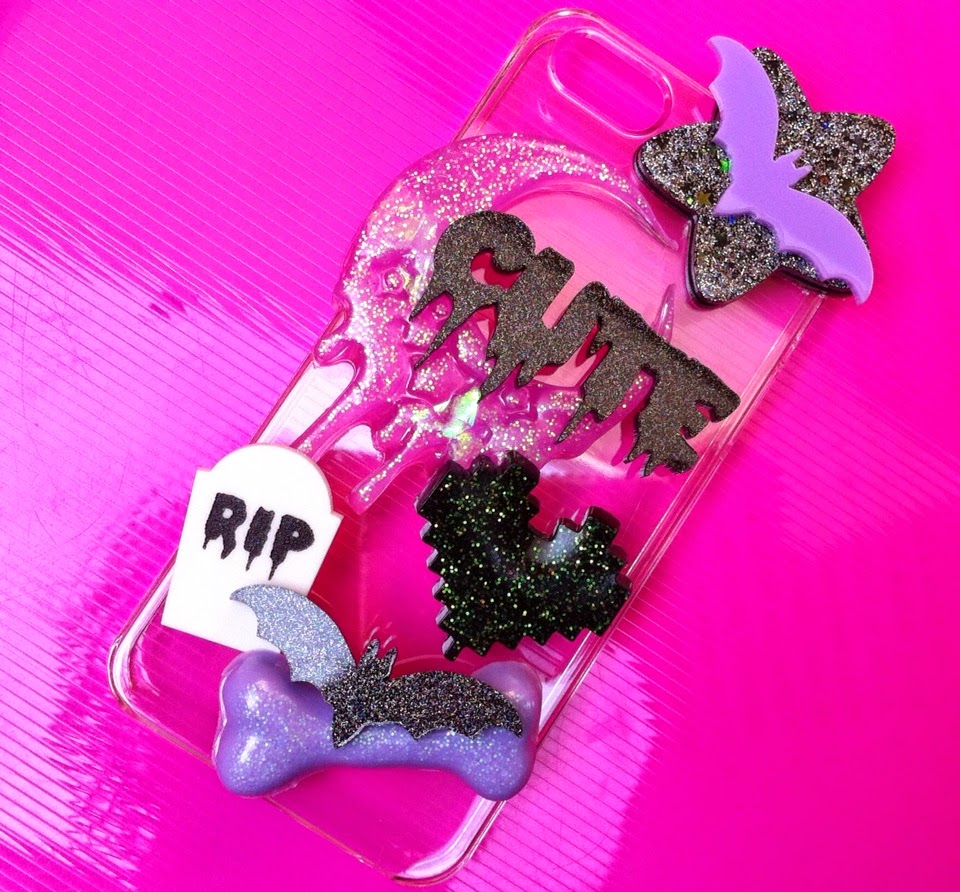 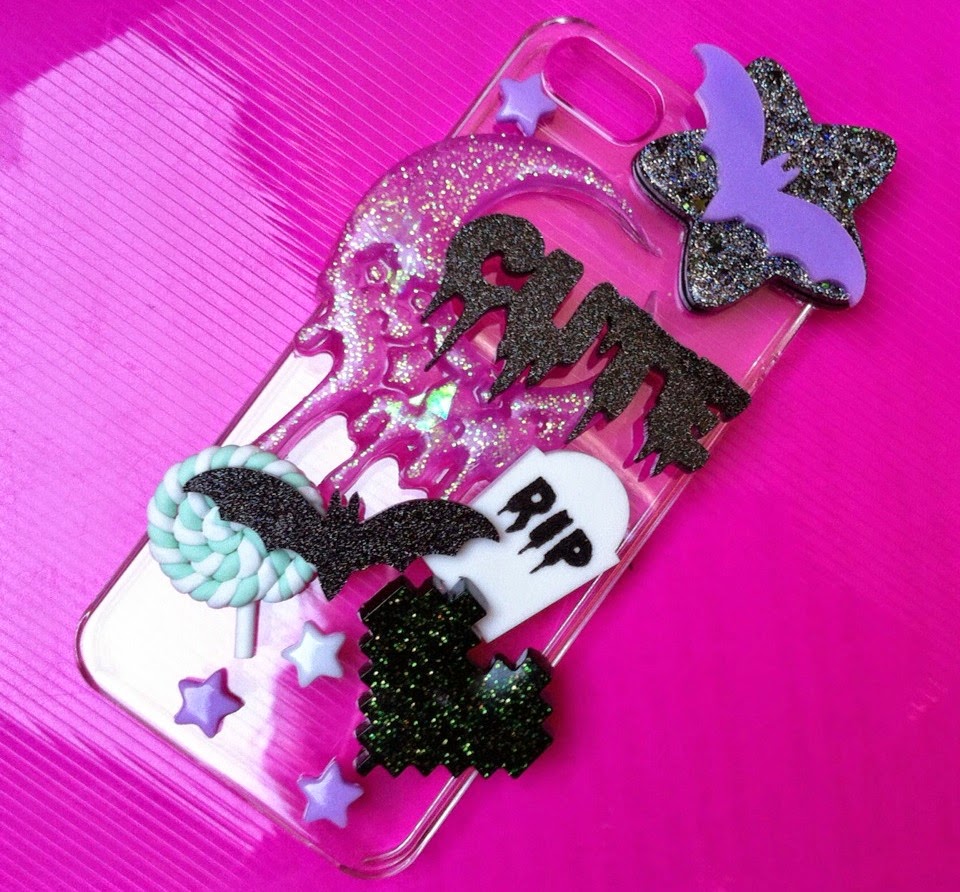 These were the two quick designs that were put together. The first (left) was so good! I was amazed at how the nail was almost hit on the head..especially considering the only thing Id said was “….bats!”. With the second design it was love at first sight. Amazing. Perfect. This was all Jessies own creativity btw .. by the time the second design was done the only other thing id added was “Can we maybe get rid of the bone and add a few small stars?”.

The design was confirmed on the 30th of September and shipped two days later on the 2nd of October.
It arrived the next day but my parents failed to tell me as they were holding all of my mail random incase any were birthday presents…. 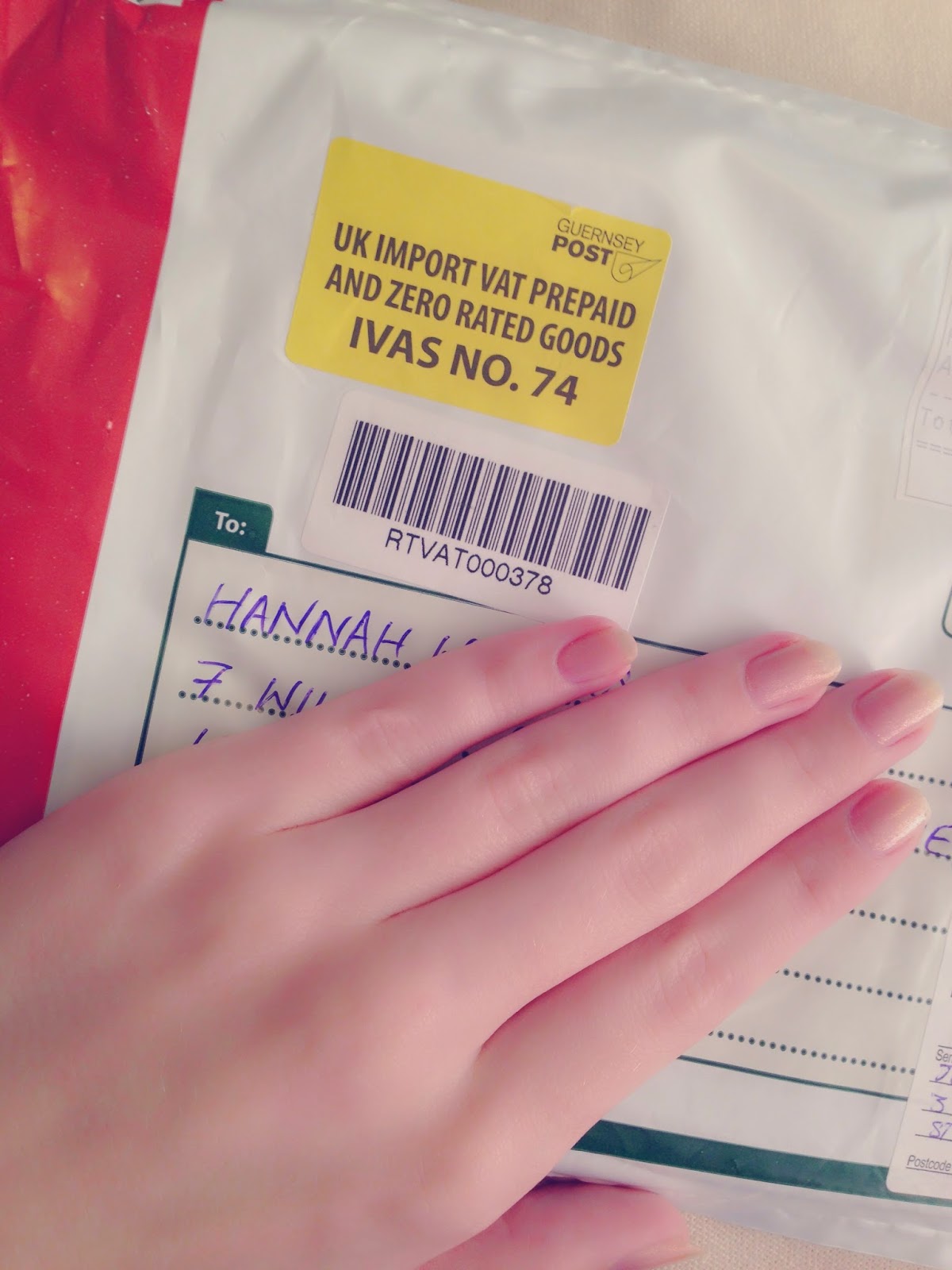 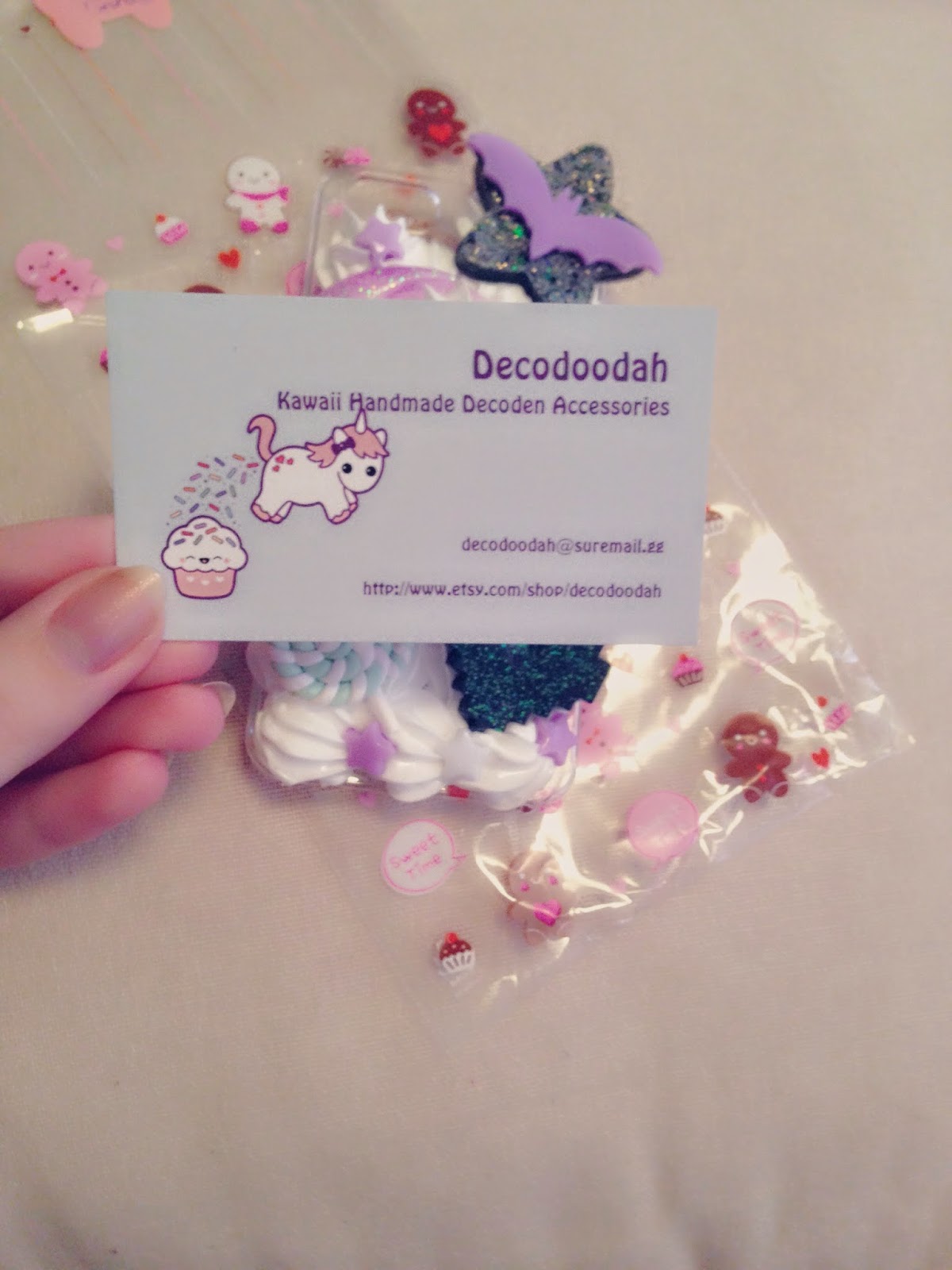 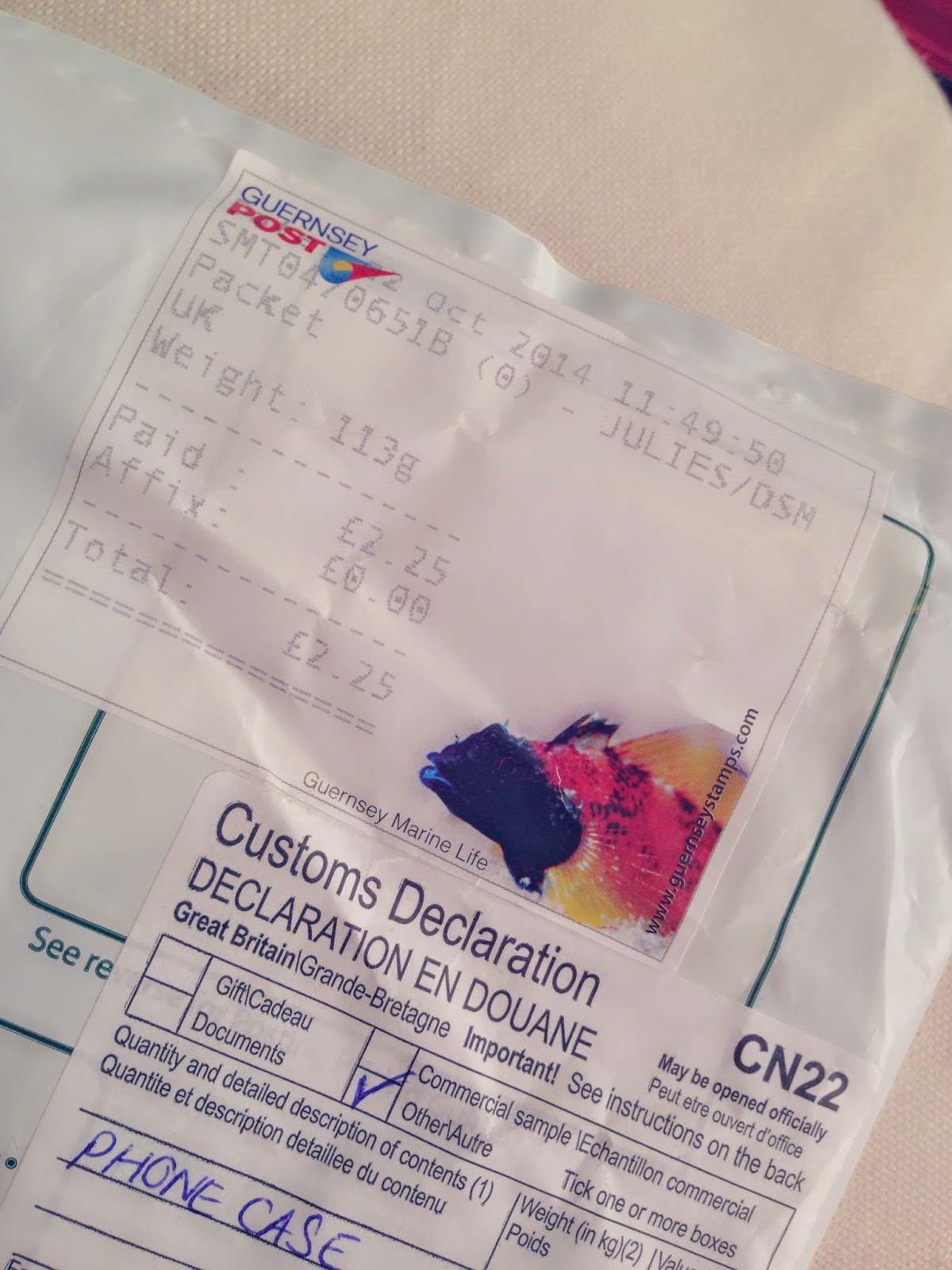 The case arrived bubble wrapped in a bubble wrap lined envelope so.. there was no chance of it getting hurt in the post.
I also got a cute business card to add to my collection. 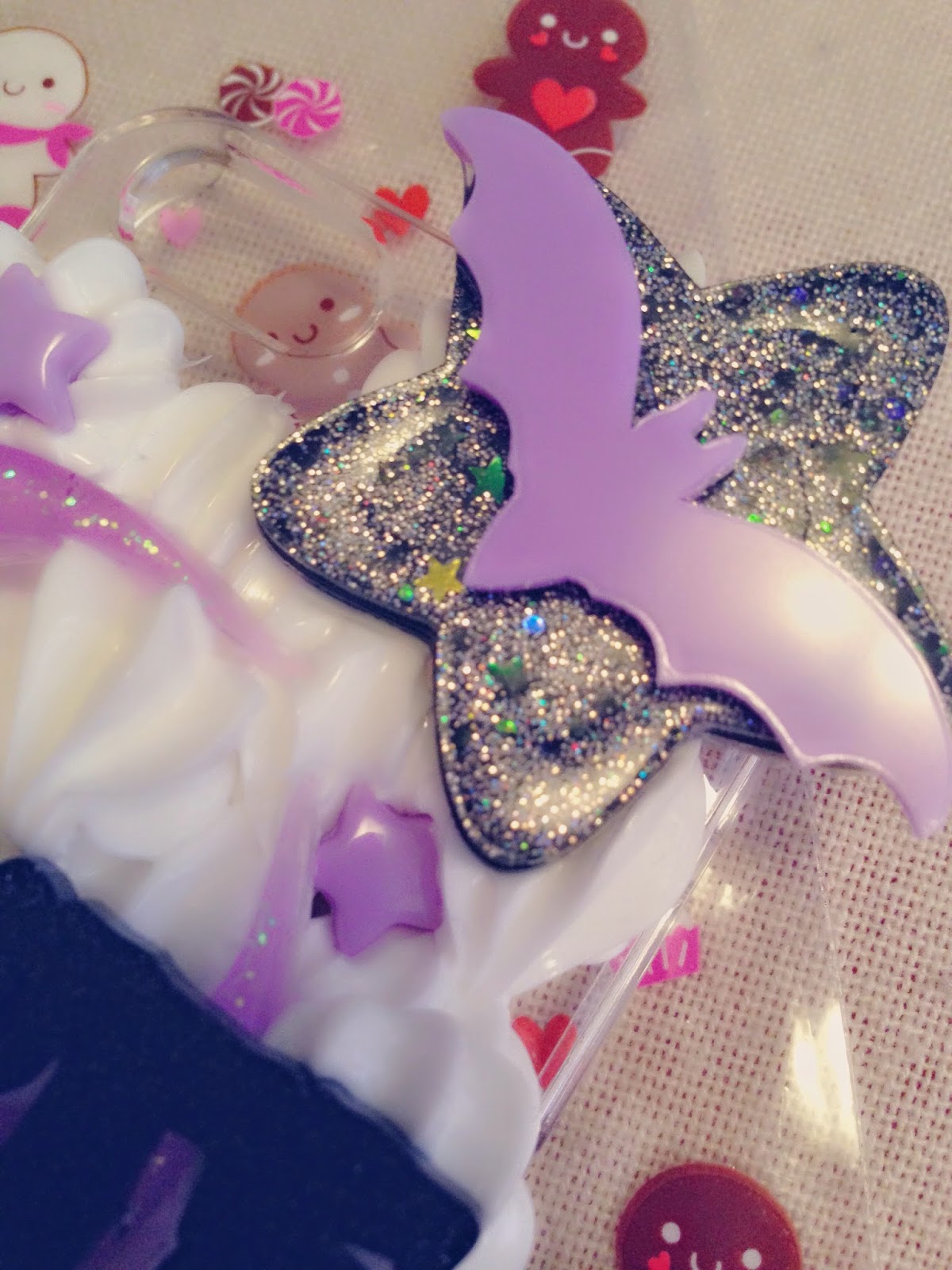 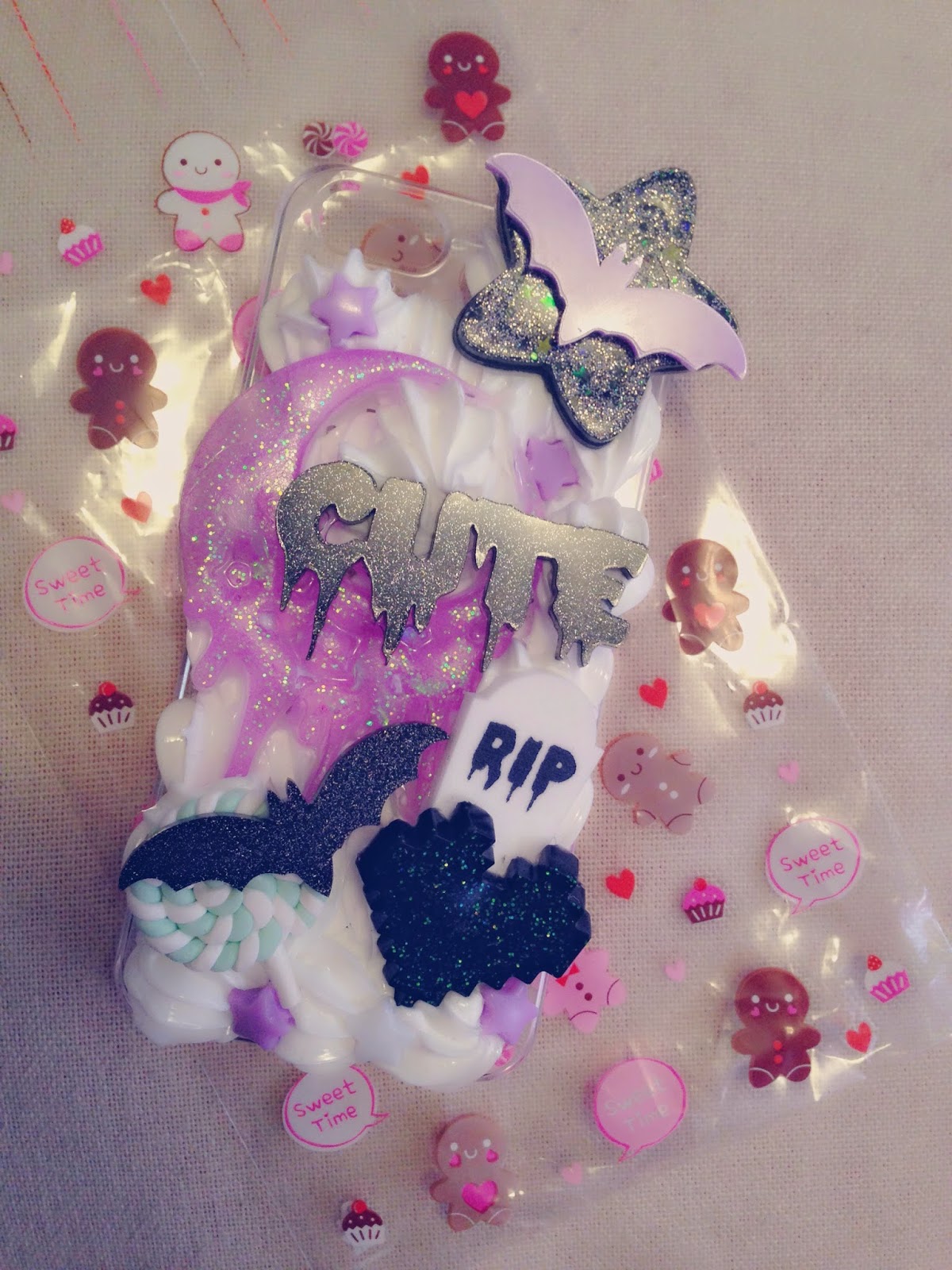 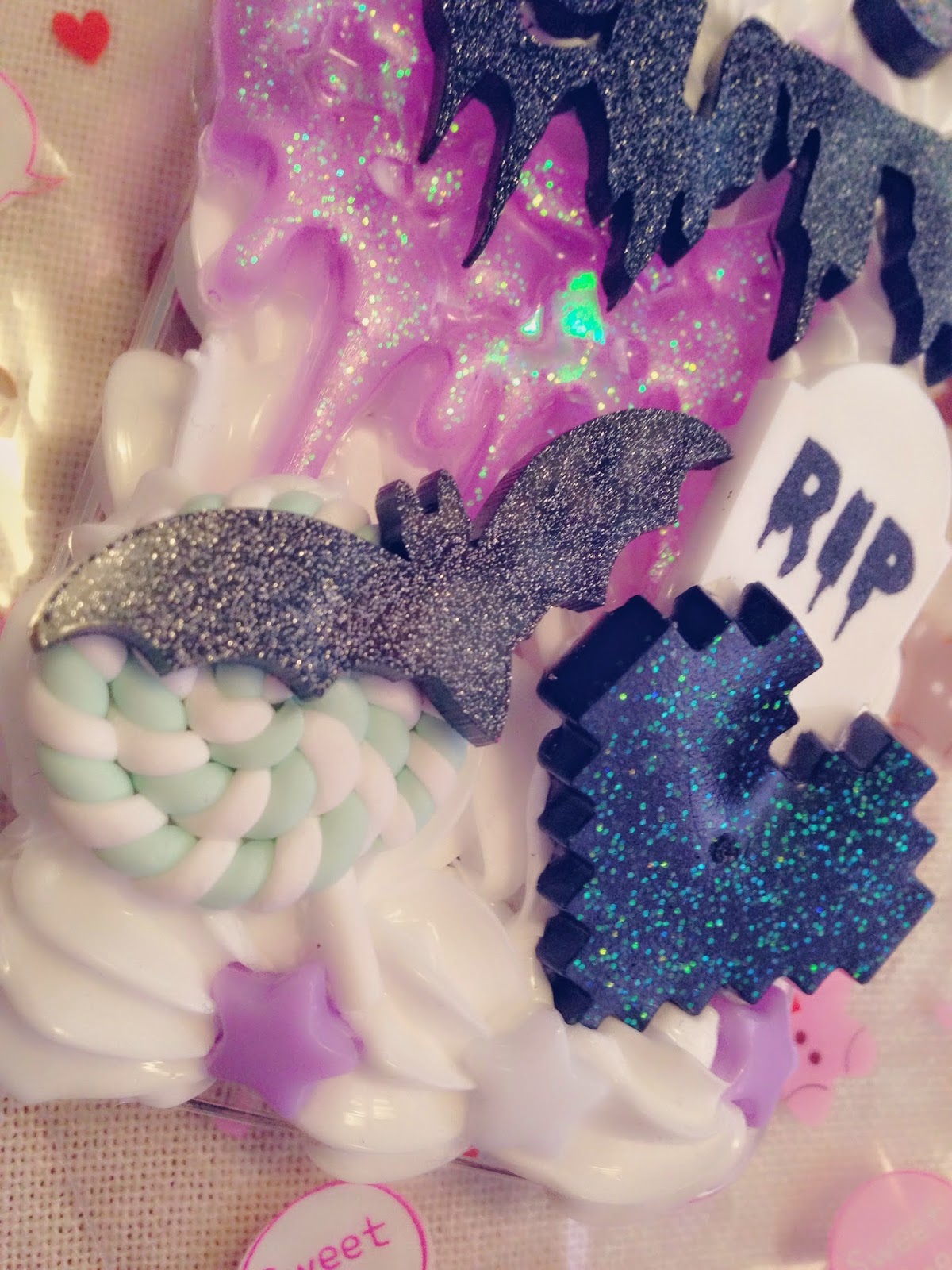 I love it so much! Exactly what I wanted and for a good price too.. Perfect for halloween but also, in my opinion, perfect all year round. 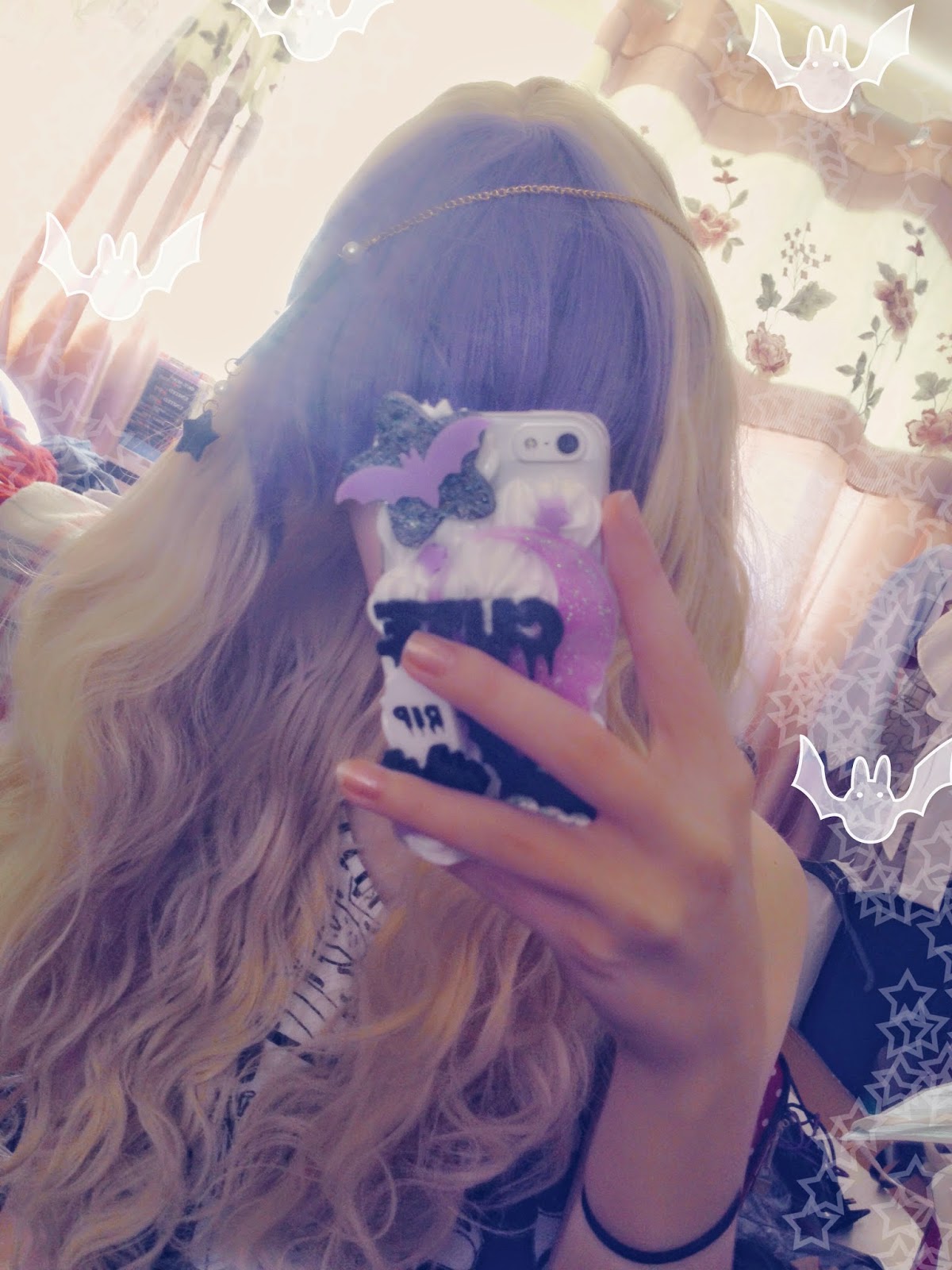 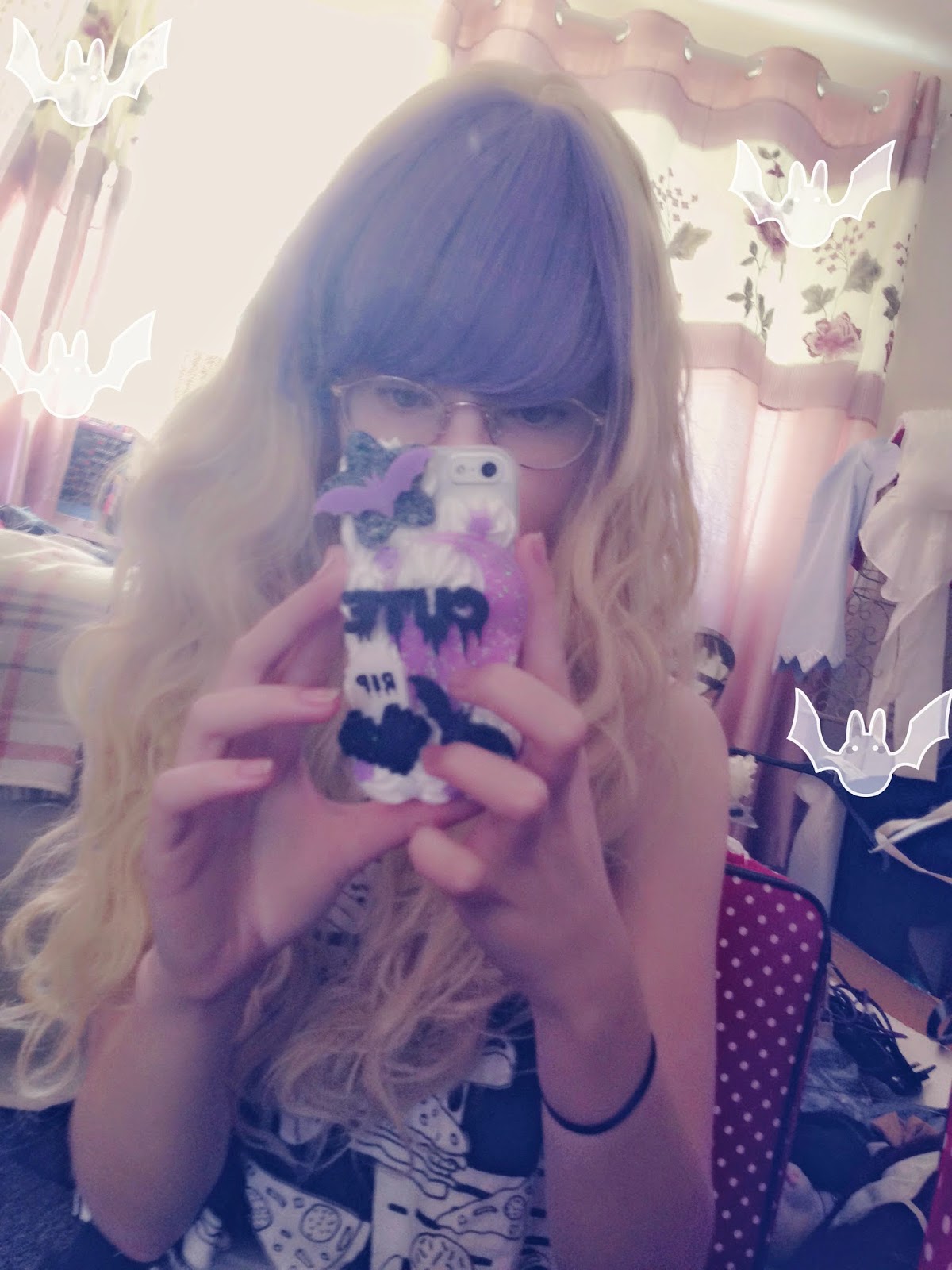 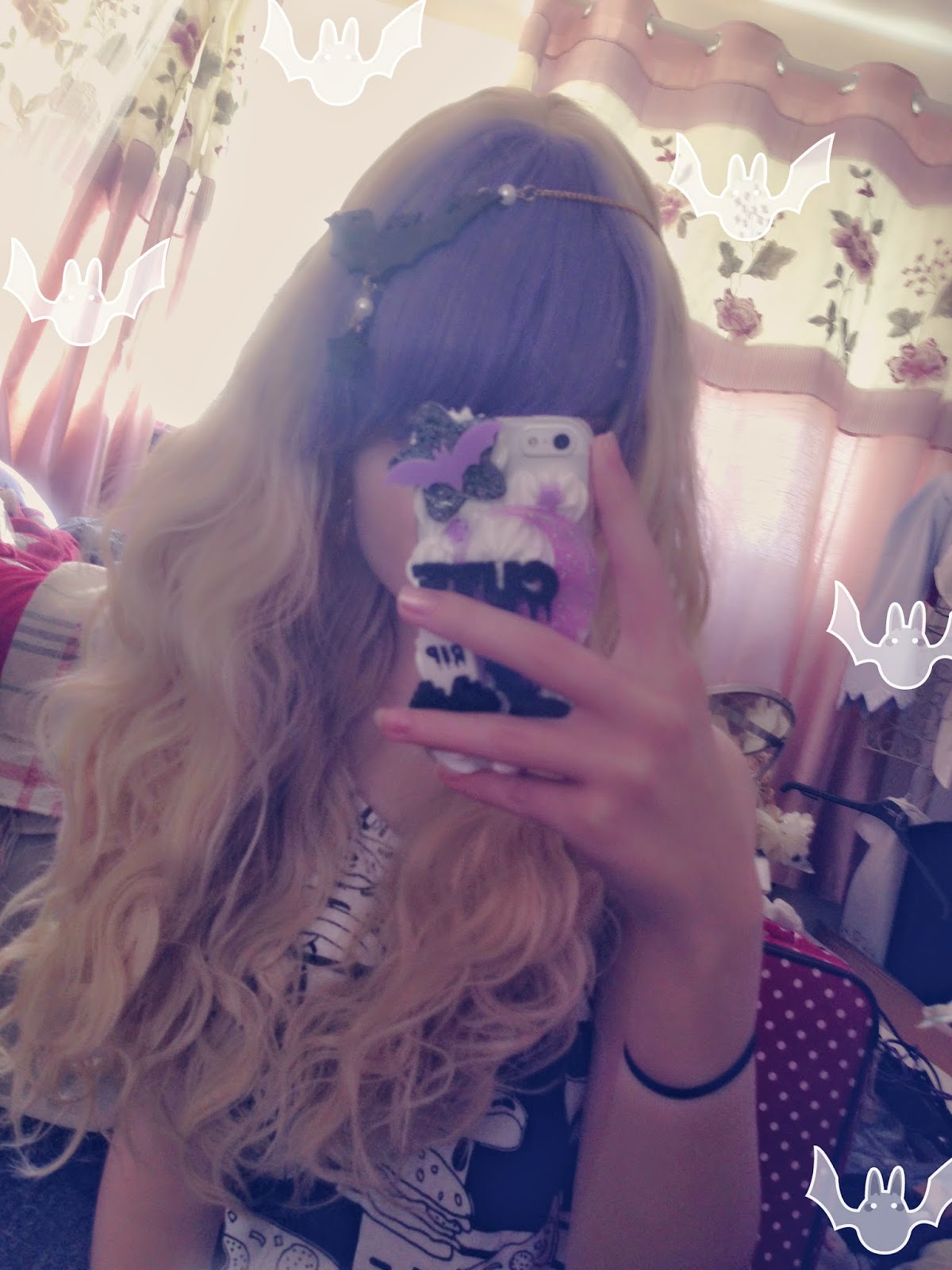 Okayokayokayokay so:
Price: 5/5. The phone case itself was £16 and shipping to England was £5 which is all very reasonable. Ive seen many custom deco cases cost double that for about the same amount of deco so thats my reason for the 5/5.
Communication: 5/5. Every message I sent got replied to super duper fast, even though I was slow to reply. Jessie was super nice and helpful and made me feel not bad about changing stuff (as I said above I usually feel really bad asking to change stuff, even when custom made).
Shipping: 5/5. Delivery was super fast but that was to be expected as it wasnt coming from very far away.
Packaging: 5/5. Very secure and no chance of anything breaking! Also the phone case itself was put inside a cute little plastic bag which gave it a very offical feeling hahaha.
Quality: 5/5. Im getting a little bit repetative now arent I? …its just so good! I had to take the phone case off to take detailed pictures as I forgot to do it before and I was sooooo scared it would break as the case is a snap on case but it didnt.. Also I may have dropped it a few times with no breakage >.>

Overall: 5/5.
Im really happy with the case and im so glad I decided to get it! I may just have to get a christmas themed one hmmm……..

Ah well thats all ive got for you right now! Hope you enjoyed the review!

.
.
.
.
.
When I was taking photos I saw a snapchat from a friend of their dog and I screenshotted it and when importing the pictures to upload it accidently got imported too and ——> 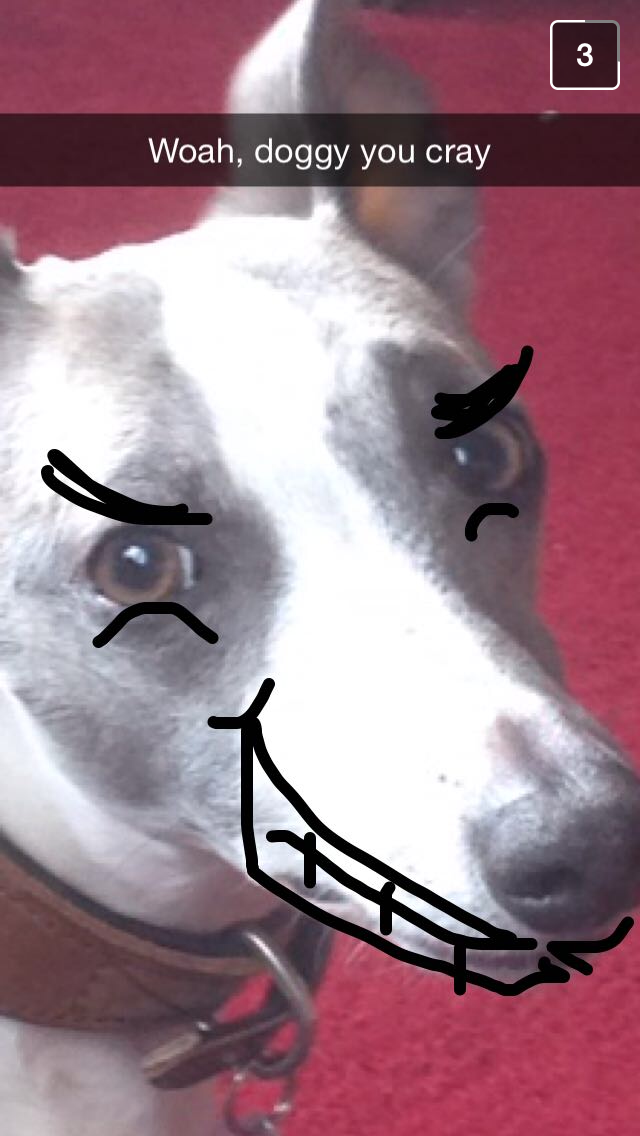 Harry Styles should write a song about sunflowers

Hands down the best thing to come from me moving b

wuu2? me? oh just setting off my allergies for the

made my makeup match my hair 👼🏼